Beware the Scope Creep! (and prevent it in 5 impactful steps)

Once upon a time, there lived a young and very handsome bridge builder (let’s call him Paddy). He was loved by those he had worked for because his bridges were well-designed, practical, and provided travelers with easy access to new lands and new opportunities. Even her majesty, the queen, was impressed and had asked Paddy to dine with her in the royal banquet hall on a few occasions.

But one day, as he was starting construction on his latest commission, Paddy was approached by a mischievous trickster, the scope creep, who loved to fill his unsuspecting victims’ heads with delusions of grandeur. For this charade, he was wearing fancy clothes, glittering jewelry, and the finest colognes, which created a seductive façade of wealth, power, and status.

The creep sauntered up to Paddy and asked about the project, and when told it would be a simple and straightforward bridge, he replied with a sly smile, “What a shame that you are thinking so small. It might be fine for now, but will it be big enough to handle everyone in the future as well? Also, does this trifle truly reflect your talents? It’s just an ordinary bridge, but it could be a grand testament to your immense creativity and knowledge. Shouldn’t it be spectacular and amazing and something for which you will always be remembered, and one that could lead you to greater wealth someday?”

Convinced by the trickster’s silver tongue and successful aura, as well as the idea of creating something that could really get him noticed, Paddy jettisoned his simpler ideas and began planning his most elaborate bridge yet. He took ideas and inspiration from all over the land to make sure this masterpiece could be everything to everybody.

When it was finished, about six months past when its original due date, all the nearby townsfolk came to see what had been constructed…and immediately hated it. Instead of building it across the narrowest point of the river, Paddy had selected the widest section, meaning the bridge was much longer (and more exhausting) than it needed to be. It contained many unnecessary flourishes, oddly-placed barriers, and confusing passageways, all of which made getting from one side to another practically impossible. To top it all off, the tremendous cost of construction had very nearly drained the village treasury. “Boo!” the townsfolk started yelling, and then began marking bad scores on their bridge evaluation forms. 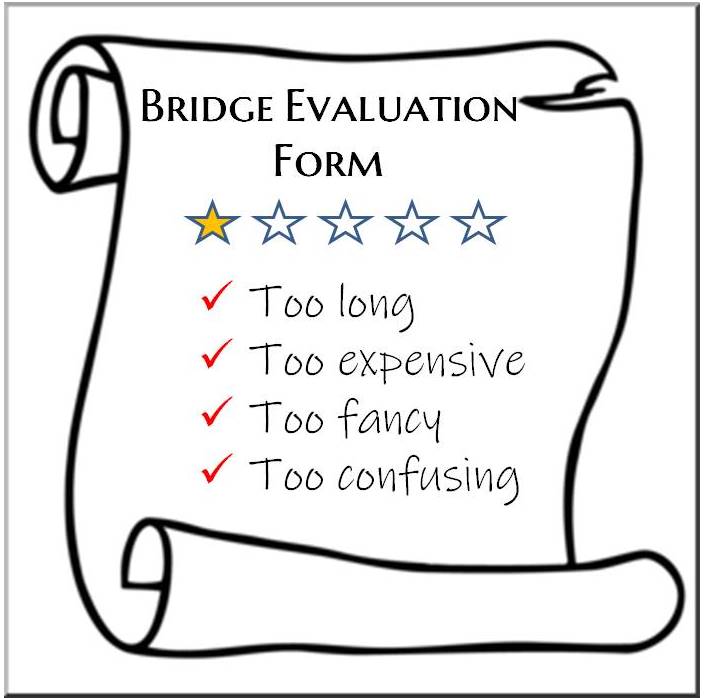 Does this tale sound familiar? Have you headed up a project that was derailed by a visit from the scope creep? If you’ve never heard the term before, it is defined as changes or additions to a project's agenda or goals after that project has already begun. This phenomenon can occur when the scope of a project is not well-defined or controlled by the manager, and it can lead to implementation delays, cost overruns, and an inferior end product.

Regardless of whether the project is related to training (designing a learning course, choosing an LMS vendor, etc.) or for operations, avoiding scope creep can save you a lot of headaches down the road. Here are my 5 suggestions for any project manager to better handle it:

Start by assembling everyone that will be contributing to the project, as well as the client you’re doing the work for, at a kickoff meeting. Allow enough time for everyone to get to know one another, discuss the project, and start establishing the outcomes desired.

2. Define and document your scope

You will want to make sure everyone on the team is crystal clear on the expectations from the outset, and of course, get the client (and usually your boss as well) to sign off on the project. The project manager will need to publish and distribute the budget, timelines, deliverables, and who will be in charge of which assignments to all the relevant parties.

Once the project is underway, the person-in-charge should keep open lines of communication with the team and the client on how everything is progressing. This doesn’t necessarily mean more meetings each week, but rather it could be in via a brief email or through an online project management service.

This step is probably the toughest for some managers. When someone on the team offers a new idea or your client has a request which won’t add any value to the project (or worse, depletes the value), the manager needs to be OK with saying no. You won’t be considered the villain if you rationally state your case and explain why the changes should not be introduced at that juncture. If the client insists that you make the change regardless of your reasons, then you should accept the request, but not before ensuring the client is fully aware of how it will affect the timeline and budget.

5. Don’t be afraid to say yes, either

Following step #4 doesn’t mean you ALWAYS have to say no. As long as the change will add value, the client agrees to the changes, and it’s driven by the right motivations (and remember, assuaging your ego is never one of the right reasons), then changing the scope can be acceptable.

Avoiding the dreaded scope creep can be quite hard for any project manager; he can be quite devious and tempting, and sometimes he tricks you into seeing things his way without you even realizing it. It takes a lot of discipline and experience to build up an immunity to his wiles, but doing so will help your department and your company be more successful in the long run.