CHART believes in the importance of recognizing those in the industry that are committed to developing people and improving the performance of hospitality organizations. We recognize trainers and leaders for their contributions to CHART and the industry through awards and provide hospitality industry scholarships and grants for promising students and trainers in hospitality. 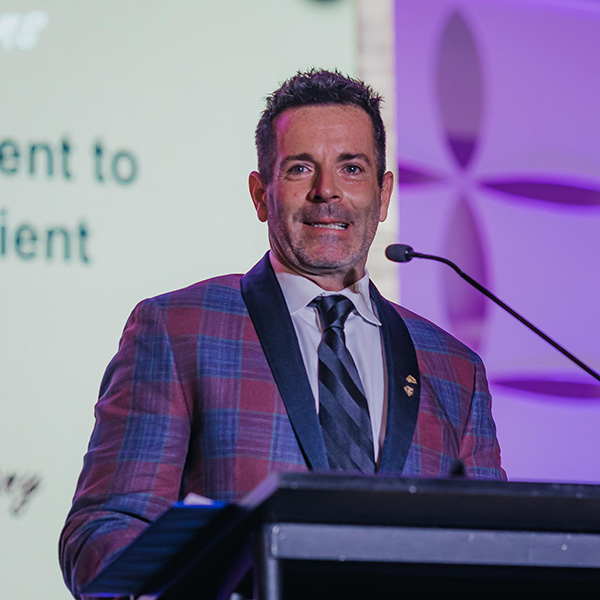 The CHART Commitment to People Award was created in 1993 to recognize leaders in the hospitality industry who demonstrate a continuous dedication to people. The award is presented annually to a member's CEO/President in recognition of their outstanding commitment to the development of people in their organizations.

Any CHART member's CEO/President who actively and consistently establishes a culture that demonstrates a belief in the value of people is eligible. Nominees must be in a top-level position in a hospitality company to be considered for this award. Any employee in the nominee's company may submit the nomination. 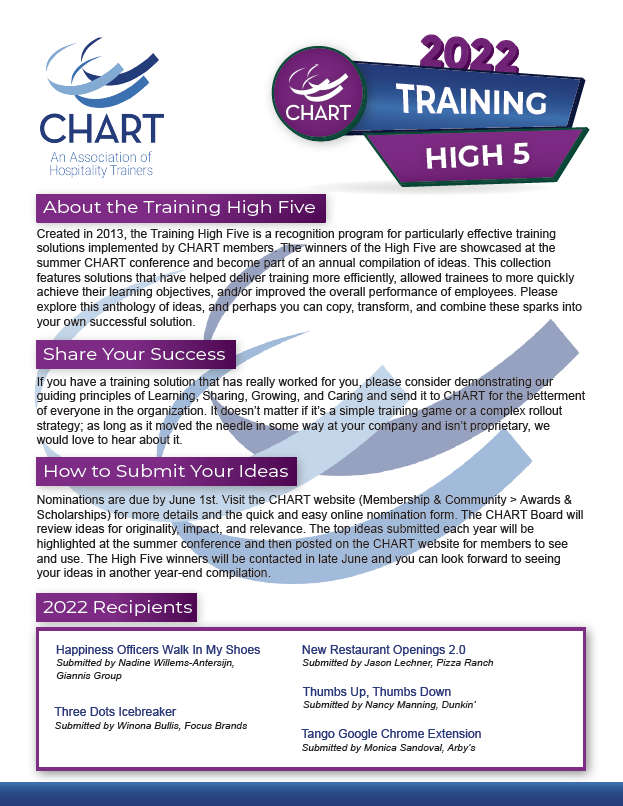 The Training High Five recognizes effective training ideas by CHART members. Each year, five ideas are chosen from member submissions of their training tip, game, or solution that really works and that others can easily adopt and implement.

The ideas are shared with all members, helping them deliver training more efficiently, better achieve their learning objectives, and improve the overall performance and engagement of employees who participate in their training programs, and published in Training High Five eBooks on our website for all to benefit from.

This award is presented to CHART members who have assisted in moving our association forward through contributions that have been above and beyond expectations. The Spirit of CHART Award represents the essence of a CHART member's commitment to CHART’s guiding principles of Learning, Sharing, Growing, and Caring. If you would like to nominate someone for this award, please email Tara Davey at tara@chart.org.

Students interested in these scholarships can apply here. The applications are accepted January - April each year.

CHART and the National Restaurant Association Educational Foundation (NRAEF) present two $5,000 scholarships each year to current or recently graduated college students with the goal to work in the hospitality industry.

The National Restaurant Association Educational Foundation is the philanthropic arm of the National Restaurant Association. Since 1987, the NRAEF has awarded over $16 million dollars in scholarships to students pursuing an education and career in the hospitality industry. NRAEF education programs include ProStart®, a two-year high school program for restaurant management and culinary arts and ManageFirst® program for post-secondary students. The Award is presented at CHART's Commitment to People Awards Gala in July, the final evening of CHART's semi-annual hospitality training conference.

The Learning Legacy Fund was established by CHART to provide a need-based professional development grant for trainers who have shown potential and passion for the profession, but who lack sufficient budget to attend a CHART conference. The grant will cover the candidate’s conference fee ($820), three nights hotel (approximately $450), airfare (maximum $400) and a stipend to cover some other expenses ($100). CHART Members and partners are encouraged to nominate worthy candidates for this special grant. Nominations are due in May and December for the following conference.

Commitment to People Award - Past Recipients

Spirit of CHART Award - Past Recipients

Sign up for Training Flash
Read the Latest Edition