As a long-time CHART member, I often have conversations with other members about memorable CHART experiences. Sometimes we talk about our favorite breakout sessions, or hotels, or activities, and sometimes we talk about which conference we liked the most overall. That last one could be tough for me to answer because I’ve been to 26 conferences during my tenure in CHART and many of them have been exceptional.

But truth be told, it's not a difficult question as one conference stands out simply because it was by far the most impactful: the 2003 Summer Conference in Boca Raton (CHART66).

I often refer to Boca as my "second first conference." The year prior I had attended two days of the Seattle conference, but I didn't really have the full FTA experience. I knew nothing about CHART (I didn't even realize it was an acronym) and was a last-minute substitute for a co-worker who’d recently been let go, so I just walked up the hill from Ivar’s waterfront offices and did my best to fit in. Both days were kind of a blur, but I did pick up a few new ideas and walked away thinking I'd like to attend more of these events.

The next year I asked my boss about attending a second conference, and he told me I could on two conditions: 1) I needed to take vacation days when gone, and 2) I would have to pay for it myself. It wasn't exactly the answer that I hoped for, but it wasn't a "no," so I made the arrangements, registered as a first-time attendee, and took off for Florida. I was a bit blown away by the Boca Raton Resort & Club, which was about 1,000 times larger and way nicer than any place I'd ever stayed before, but I managed to conquer the first few obstacles by finding my room and finding the CHART registration table. I went to the FTA meeting and met my fellow first-time attendees and my mentor, and I went through the session list to determine which ones I would go to.

But I’ll tell you: as great as those breakouts were, nothing remotely compared to the learning that came from the interactions I had with the other attendees. That’s where the magic happened for me. It was at the breaks and the lunches and the hospitality suite that I got to talk about anything and everything. For the first time ever, I was able to discuss budgets and duties and operations and salaries with other hospitality trainers. We compared our bosses and how well we partnered (or didn’t partner) with the other departments in our companies. We looked back at our victories and our defeats. Everybody was sharing all this incredible information and I felt inspired to do more and be more, so much so that I soon realized three things: 1) I needed more of an education to become a better trainer, 2) I needed to be more of an advocate for training at my company, and 3) I needed to be more of an advocate for myself at Ivar’s. I couldn’t sit back and “hope” that things would get better for me.  I needed to make it happen.

On the last day of the conference, there used to be an FTA feedback breakfast (at 7:30am!) in which the first-time attendees would fill out an evaluation of their experience and talk about what they had learned and what goals they would take back to their companies. Armed with my newfound desire to improve, I wrote my goal list the night before on a piece of Boca Resort stationery (see the original below!), and it included items such as 1) learn more about the basics of training, 2) take control of my work schedule, 3) have Ivar’s pay for 1 CHART conference per year (and not have to take vacation to attend), and most importantly to me at the time, 4) report to a different boss. The boss I had back in 2003 did not have a restaurant background and only wanted training that could be done cheaply and quickly, and I wasn’t going to progress in my role as long as he supervised me. 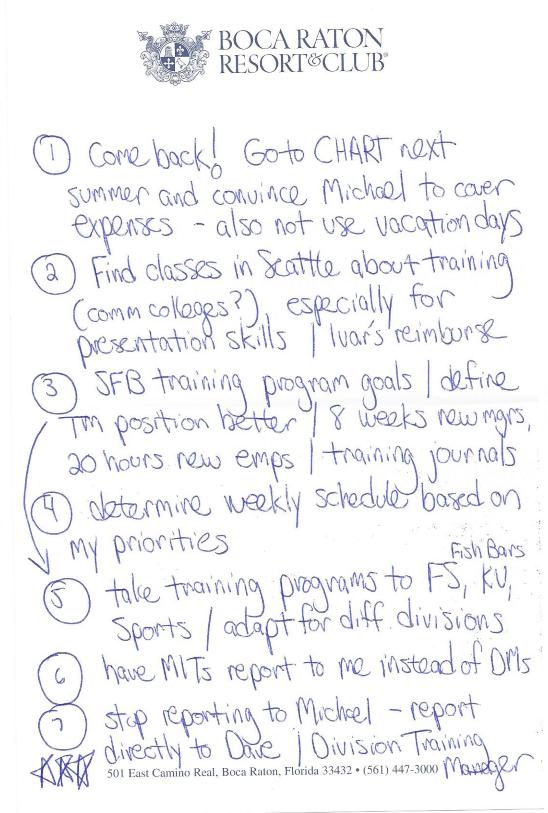 Upon returning, I worked hard to get everything on that list. Attending the Boca conference had motivated me more than anything else had ever done professionally, and I was determined to not waste that experience. It was uncomfortable, but I forced myself to speak up more and share my opinions, even when I thought they might be unpopular. If I didn’t agree with something, I said so. And I learned to ask for what I needed rather than waiting until it was given.

Within a short time, I started checking things off my list. I was able to enroll in an eight-month training specialist course at the University of Washington (which Ivar’s paid for), sign up for the next summer conference (which Ivar’s also paid for), and take charge of creating my own schedule and weekly objectives. Most importantly, in March of 2004, I began reporting to a new supervisor who actually cared about our training programs and actively rooted for me to succeed. The rest of my CHART Boca Raton goals took a bit longer, and there were some setbacks along the way, but ultimately, I did achieve everything I had put down on that list late in the evening of August 5, 2003.

As a result, the CHART66 conference in Boca Raton will always be my favorite, and I’m incredibly excited to return to the city and the hotel this summer for CHART96. I hope everyone who attends – especially the first-time and second-time attendees – have similar interactions to those I had 15 years ago, are motivated like never before to take charge of their careers, and come away feeling like it’s the most impactful conference they’ve ever attended.